What Is a "Cluster"?

A cluster represents a fault-tolerant, elastic, decentralized peer-to-peer network of Akka.NET applications with no single point of failure or bottleneck. Akka.Cluster is the module that gives you the ability to create these applications.

The best way to begin introducing Akka.Cluster is with brief overview of what it does. Akka.Cluster is the package that brings clustering support to Akka.NET, and it accomplishes this by adding the following capabilities to Akka.NET:

In short, these are the benefits of a properly designed cluster:

How Is Clustering Different From Remoting?

Akka.Cluster is a layer of abstraction on top of Akka.Remote, that puts Remoting to use for a specific structure: clusters of applications. Under the hood, Akka.Remote powers Akka.Cluster, so anything you could do with Akka.Remote is also supported by Akka.Cluster.

Generally, Akka.Remote serves as plumbing for Akka.Cluster and other "high availability" modules within Akka.NET. You would generally only use Akka.Remote by itself in scenarios that don't require the elasticity and fault-tolerance needs that Akka.Cluster provides.

To put it bluntly, you should use clustering in any scenario where you have some or all of the following conditions:

Some of the use cases where Akka.Cluster emerges as a natural fit are in:

Now that we've gone over some of the concepts and distributed programming concerns behind Akka.Cluster's design, let's focus on how to actually use it inside our own Akka.NET applications.

The first step towards using Akka.Cluster is to install the Akka.Cluster NuGet package, which you can do inside the Package Manager Console in Visual Studio:

Once you've installed Akka.Cluster, we need to update our HOCON configuration to turn on the ClusterActorRefProvider, configure an Akka.Remote transport, and enable at least 1 seed node.

In this instance, we're configuring this node to act as a seed node to the cluster, so it uses its own Akka.NET Address inside the cluster.seed-nodes property.

You can, and should, specify multiple seed nodes inside this field - and seed nodes should refer to themselves.

If you're using dedicated seed nodes (such as Lighthouse), you should run at least 2 or 3. If you only have one seed node and that machine crashes, the cluster will continue operating but no new members can join the cluster!

In this case, we've created a non-seed node - it binds its Akka.Remote transport to a random port assigned by the operating system, but it connects to the seed node we assigned in the previous section.

All nodes in an Akka.NET cluster must have the same ActorSystem name.

This is important! Even if you're running multiple separate Akka.NET applications inside a single Akka.NET cluster, they must all share the same ActorSystem name - otherwise they will not be permitted to join the cluster.

This is the most important concept within Akka.Cluster. This is how nodes are able to join and leave clusters without any configuration changes.

Gossip is the ongoing flow of messages that are passed between nodes in a cluster, updating cluster members of the state of each member of the cluster.

When a node wants to join a cluster, it must first contact one of its configured seed nodes. Once the node has been able to connect to one seed node, it will begin receiving gossip messages containing information about other members of the cluster.

So in the example above:

Gossip messages will occur regularly over time whenever there is any change in the status of a member of the cluster, such as when a node joins the cluster, leaves the cluster, becomes unreachable by other nodes, etc.

Generally, you will not interact with gossip messages at the application level. But you do need to be aware of them and know that they power the cluster. To learn more about gossip and event types, see Working With Cluster Gossip.

A node is a logical member of a cluster. A node is defined by the address at which it is reachable (hostname:port tuple). Because of this, more than one node can exist simultaneously on a given machine.

A seed node is a well-known contact point that a new node must contact in order to join the cluster. Seed nodes function as the service-discovery mechanism of Akka.Cluster.

Lighthouse is a pre-built, dedicated seed node tool that you can use. It's extremely lightweight and only needs to be upgraded when Akka.Cluster itself is upgraded. If you're hosted on a platform like Azure or AWS, you can also tap into the platform-specific APIs to accomplish the same effect.

How a Cluster Forms

This is what the process of a node joining the cluster looks like:

We can picture the initial state of a 5-node Akka.NET cluster to look like this: 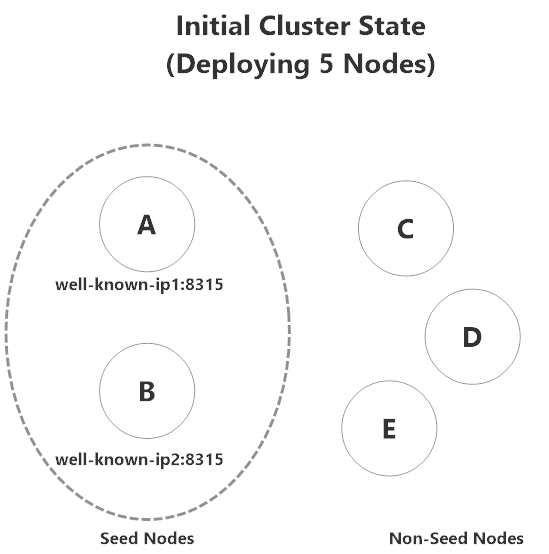 A and B are both seed nodes, and listen on IP address / port combinations that are baked into the configurations of C, D, and E.

A and B also know each other's locations, so they can communicate with each other initially also.

A special rule applies the first time a cluster forms: the first seed node declared in a akka.cluster.seed-nodes list must be up. Otherwise the cluster will not form. This is designed to prevent a split brain from forming the first time a cluster launches. And in general, as a best practice: always use an identical seed node list on every node, including the seed nodes. This will give you the most consistent behavior and results. 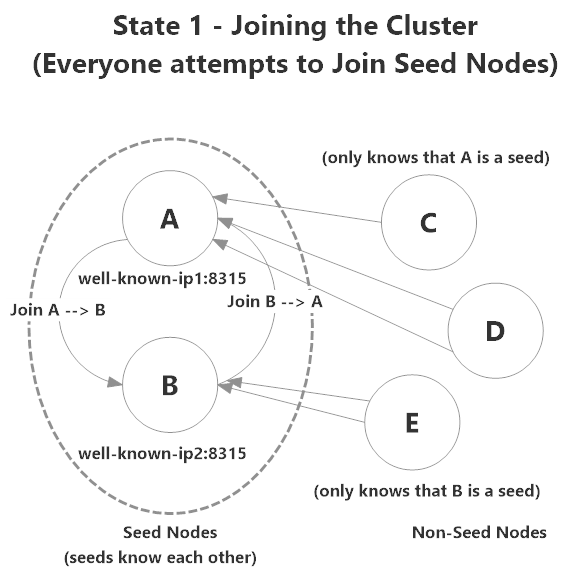 All nodes initially attempt to connect to a seed node - in this instance the nodes are configured in the following way:

During the process of initial contact within the cluster, a leader will be elected. In this case node A is elected to be the leader of the cluster.

A will begin marking nodes as up, beginning with the nodes it knows about: A,B,C, and D. A does not know about node E yet, so it's not marked as up.

Gossip information about the membership of the cluster will begin to spread to all nodes, and the nodes will all begin to connect to each other to form a mesh network. 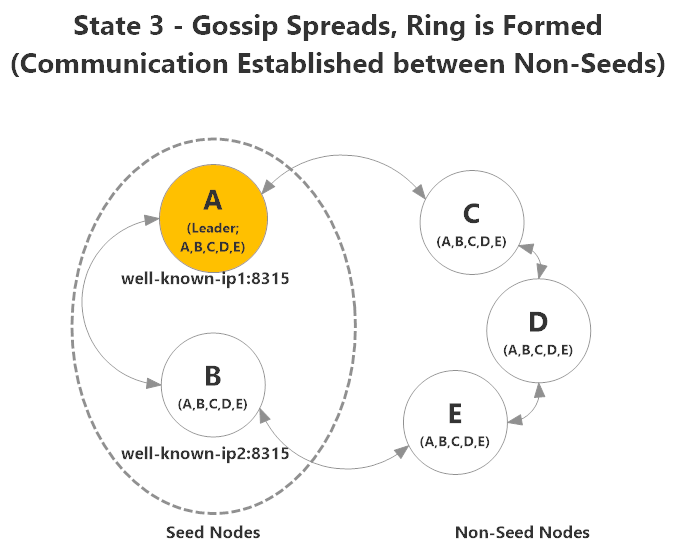 After the gossip has had a chance to propagate across all nodes and the leader has marked everyone as up, every node will be connected to every other node and the cluster will have formed. Every node can now participate in any user-defined cluster operations.

The cluster leader is chosen by a leader election algorithm that randomly picks a leader from the available set of nodes when the cluster forms. Usually, the leader is one of the seed nodes.

Each role within the cluster also has a leader, just for that role. Its primary responsibility is enforcing a minimum number of "up" members within the role (if specified in the cluster config).

Nodes send each other heartbeats on an ongoing basis. If a node misses enough heartbeats, this will trigger unreachable gossip messages from its peers. The leader will wait for the node to either become reachable again, restart or get downed. Until that happens, the cluster is not in a consistent state and the leader indicates that it is unable to perform its duties. If the gossip from a quorum of cluster nodes agree that the node is unreachable ("convergence"), the leader will mark it as down and begin removing the node from the cluster. You can control how long the cluster waits for unreachable nodes through the auto-down-unreachable-after setting.

When marked as unreachable, the node can restart and join the cluster again, however the association will only be formed if that node is identified as the same node that became unreachable. If you use dynamic addressing (port 0), starting a node again might result in a different port being assigned upon restart. The result of that is that the cluster remains in an inconsistent state, waiting to the unreachable node to either become reachable or get downed.

A node might also exit the cluster gracefully, preventing it from being marked as unreachable in the first place. Akka.net uses IDowningProvider to take the nodes through all the stages of exiting the cluster. Starting in Akka.NET 1.2 CoordinatedShutdown was introduced allowing the user to easily invoke that mechanism.

Location transparency is the underlying principle powering all of Akka.Remote and Akka.Cluster. The key point is that in a cluster, it's entirely possible that the actors you interface with to do work can be living on any node in the cluster... and you don't have to worry about which one.