This chapter describes how actors are identified and located within a possibly distributed actor system. It ties into the central idea that Actor Systems form intrinsic supervision hierarchies as well as that communication between actors is transparent with respect to their placement across multiple network nodes. 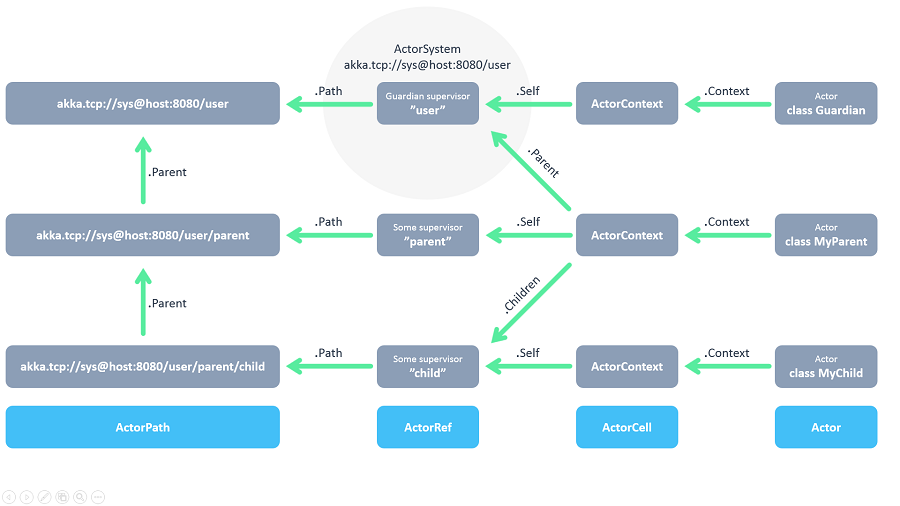 The above image displays the relationship between the most important entities within an actor system, please read on for the details.

What is an Actor Reference?

There are several different types of actor references that are supported depending on the configuration of the actor system:

What is an Actor Path?

Since actors are created in a strictly hierarchical fashion, there exists a unique sequence of actor names given by recursively following the supervision links between child and parent down towards the root of the actor system. This sequence can be seen as enclosing folders in a file system, hence we adopted the name "path" to refer to it, although actor hierarchy has some fundamental difference from file system hierarchy.

An actor path consists of an anchor, which identifies the actor system, followed by the concatenation of the path elements, from root guardian to the designated actor; the path elements are the names of the traversed actors and are separated by slashes.

What is the Difference Between Actor Reference and Path?

Each actor path has an address component, describing the protocol and location by which the corresponding actor is reachable, followed by the names of the actors in the hierarchy from the root up. Examples are:

Here, akka.tcp is the default remote transport; other transports are pluggable. A remote host using UDP would be accessible by using akka.udp. The interpretation of the host and port part (i.e.serv.example.com:5678 in the example) depends on the transport mechanism used, but it must abide by the URI structural rules.

The unique path obtained by following the parental supervision links towards the root guardian is called the logical actor path. This path matches exactly the creation ancestry of an actor, so it is completely deterministic as soon as the actor system's remoting configuration (and with it the address component of the path) is set.

While the logical actor path describes the functional location within one actor system, configuration-based remote deployment means that an actor may be created on a different network host than its parent, i.e. within a different actor system. In this case, following the actor path from the root guardian up entails traversing the network, which is a costly operation. Therefore, each actor also has a physical path, starting at the root guardian of the actor system where the actual actor object resides. Using this path as sender reference when querying other actors will let them reply directly to this actor, minimizing delays incurred by routing.

One important aspect is that a physical actor path never spans multiple actor systems or CLRs. This means that the logical path (supervision hierarchy) and the physical path (actor deployment) of an actor may diverge if one of its ancestors is remotely supervised.

As in some real file-systems you might think of a "path alias" or "symbolic link" for an actor, i.e. one actor may be reachable using more than one path. However, you should note that actor hierarchy is different from file system hierarchy. You cannot freely create actor paths like symbolic links to refer to arbitrary actors. As described in the above logical and physical actor path sections, an actor path must be either logical path which represents supervision hierarchy, or physical path which represents actor deployment.

How are Actor References obtained?

An actor system is typically started by creating actors beneath the guardian actor using the ActorSystem.ActorOf method and then using ActorContext.ActorOf from within the created actors to spawn the actor tree. These methods return a reference to the newly created actor. Each actor has direct access (through its ActorContext) to references for its parent, itself and its children. These references may be sent within messages to other actors, enabling those to reply directly.

Looking up Actors by Concrete Path

In addition, actor references may be looked up using the ActorSystem.ActorSelection method. The selection can be used for communicating with said actor and the actor corresponding to the selection is looked up when delivering each message.

To acquire an ActorRef that is bound to the life-cycle of a specific actor you need to send a message, such as the built-in Identify message, to the actor and use the Sender reference of a reply from the actor.

In addition to ActorSystem.actorSelection there is also ActorContext.ActorSelection, which is available inside any actor as Context.ActorSelection. This yields an actor selection much like its twin on ActorSystem, but instead of looking up the path starting from the root of the actor tree it starts out on the current actor. Path elements consisting of two dots ("..") may be used to access the parent actor. You can for example send a message to a specific sibling:

Absolute paths may of course also be looked up on context in the usual way, i.e.

will work as expected.

Since the actor system forms a file-system like hierarchy, matching on paths is possible in the same way as supported by Unix shells: you may replace (parts of) path element names with wildcards («*» and «?») to formulate a selection which may match zero or more actual actors. Because the result is not a single actor reference, it has a different type ActorSelection and does not support the full set of operations an IActorRef does. Selections may be formulated using the ActorSystem.ActorSelection and IActorContext.ActorSelection methods and do support sending messages:

will send msg to all siblings including the current actor.

What the above sections described in some detail can be summarized and memorized easily as follows:

If you need to keep track of actor references in a collection and do not care about the exact actor incarnation you can use the ActorPath as key, because the identifier of the target actor is not taken into account when comparing actor paths.

When an actor is terminated, its reference will point to the dead letter mailbox, DeathWatch will publish its final transition and in general it is not expected to come back to life again (since the actor life cycle does not allow this). While it is possible to create an actor at a later time with an identical path—simply due to it being impossible to enforce the opposite without keeping the set of all actors ever created available—this is not good practice: messages sent with ActorSelection to an actor which "died" suddenly start to work again, but without any guarantee of ordering between this transition and any other event, hence the new inhabitant of the path may receive messages which were destined for the previous tenant.

It may be the right thing to do in very specific circumstances, but make sure to confine the handling of this precisely to the actor's supervisor, because that is the only actor which can reliably detect proper deregistration of the name, before which creation of the new child will fail.

It may also be required during testing, when the test subject depends on being instantiated at a specific path. In that case it is best to mock its supervisor so that it will forward the Terminated message to the appropriate point in the test procedure, enabling the latter to await proper deregistration of the name.

The Interplay with Remote Deployment

When an actor creates a child, the actor system's deployer will decide whether the new actor resides in the same CLR or on another node. In the second case, creation of the actor will be triggered via a network connection to happen in a different CLR and consequently within a different actor system. The remote system will place the new actor below a special path reserved for this purpose and the supervisor of the new actor will be a remote actor reference (representing that actor which triggered its creation). In this case, context.parent (the supervisor reference) and context.path.parent (the parent node in the actor's path) do not represent the same actor. However, looking up the child's name within the supervisor will find it on the remote node, preserving logical structure e.g. when sending to an unresolved actor reference. 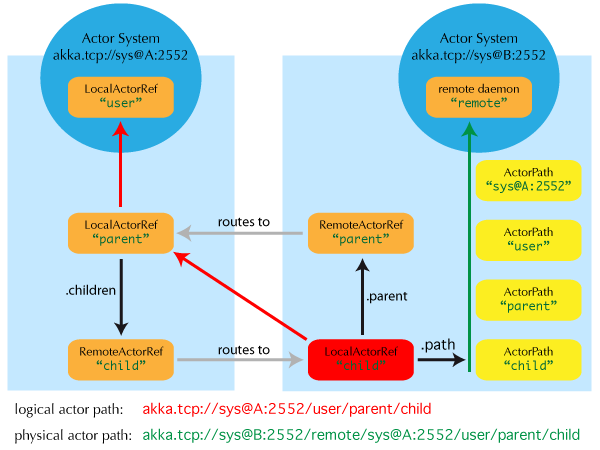 What is the Address part used for?

When sending an actor reference across the network, it is represented by its path. Hence, the path must fully encode all information necessary to send messages to the underlying actor. This is achieved by encoding protocol, host and port in the address part of the path string. When an actor system receives an actor path from a remote node, it checks whether that path's address matches the address of this actor system, in which case it will be resolved to the actor's local reference. Otherwise, it will be represented by a remote actor reference.

At the root of the path hierarchy resides the root guardian above which all other actors are found; its name is "/". The next level consists of the following:

If you want to read more about the top-level structure of an actor system, have a look at The Top-Level Supervisors.