In this and the following chapters, we will build a sample Akka.NET application to introduce you to the language of actors and how solutions can be formulated with them. It is a common hurdle for beginners to translate their project into actors even though they don't understand what they do on the high-level. We will build the core logic of a small application and this will serve as a guide for common patterns that will help to kickstart Akka.NET projects.

The application we aim to write will be a simplified IoT system where devices, installed at the home of users, can report temperature data from sensors. Users will be able to query the current state of these sensors. To keep things simple, we will not actually expose the application via HTTP or any other external API, we will, instead, concentrate only on the core logic. However, we will write tests for the pieces of the application to get comfortable and proficient with testing actors early on.

Our Goals for the IoT System

We will build a simple IoT application with the bare essentials to demonstrate designing an Akka.NET-based system. The application will consist of two main components:

For simplicity, we will only collect temperature data for the devices, but in a real application our local representations for a remote device, which we will model as an actor, would have many more responsibilities. Among others; reading the configuration of the device, changing the configuration, checking if the devices are unresponsive, etc. We leave these complexities for now as they can be easily added as an exercise.

We will also not address the means by which the remote devices communicate with the local representations (actors). Instead, we just build an actor based API that such a network protocol could use. We will use tests for our API everywhere though.

The architecture of the application will look like this:

When writing prose, the hardest part is usually to write the first couple of sentences. There is a similar feeling when trying to build an Akka.NET system: What should be the first actor? Where should it live? What should it do? Fortunately, unlike with prose, there are established best practices that can guide us through these initial steps.

When one creates an actor in Akka.NET it always belongs to a certain parent. This means that actors are always organized into a tree. In general, creating an actor can only happen from inside another actor. This 'creator' actor becomes the parent of the newly created child actor. You might ask then, who is the parent of the first actor you create? To create a top-level actor one must first initialise an actor system, let's refer to this as the object System. This is followed by a call to System.ActorOf() which returns a reference to the newly created actor. This does not create a "freestanding" actor though, instead, it injects the corresponding actor as a child into an already existing tree:

The names of these built-in actors contain guardian because these are supervising every actor living as a child of them, i.e. under their path. We will explain supervision in more detail, all you need to know now is that every unhandled failure from actors bubbles up to their parent that, in turn, can decide how to handle this failure. These predefined actors are guardians in the sense that they are the final lines of defence, where all unhandled failures from user, or system, actors end up.

Structure of an IActorRef and Paths of Actors

The easiest way to see this in action is to simply print IActorRef instances. In this small experiment, we print the reference of the first actor we create and then we create a child of this actor, and print its reference. We have already created actors with System.ActorOf(), which creates an actor under /user directly. We call this kind of actors top level, even though in practice they are not on the top of the hierarchy, only on the top of the user defined hierarchy. Since in practice we usually concern ourselves about actors under /user this is still a convenient terminology, and we will stick to it.

Creating a non-top-level actor is possible from any actor, by invoking Context.ActorOf() which has the exact same signature as its top-level counterpart. This is how it looks like in practice:

We see that the following two lines are printed

First, we notice that all of the paths start with akka://testSystem/. Since all actor references are valid URLs, there is a protocol field needed, which is akka:// in the case of actors. Then, just like on the World Wide Web, the system is identified. In our case, this is testSystem, but could be any other name (if remote communication between multiple systems is enabled this name is the hostname of the system so other systems can find it on the network). Our two actors, as we have discussed before, live under user, and form a hierarchy:

The last part of the actor reference, like #1053618476 is a unique identifier of the actor living under the path. This is usually not something the user needs to be concerned with, and we leave the discussion of this field for later.

Hierarchy and Lifecycle of Actors

We have so far seen that actors are organized into a strict hierarchy. This hierarchy consists of a predefined upper layer of three actors (the root guardian, the user guardian, and the system guardian), thereafter the user created top-level actors (those directly living under /user) and the children of those. We now understand what the hierarchy looks like, but there are some nagging unanswered questions: Why do we need this hierarchy? What is it used for?

The first use of the hierarchy is to manage the lifecycle of actors. Actors pop into existence when created, then later, at user requests, they are stopped. Whenever an actor is stopped, all of its children are recursively stopped too. This is a very useful property and greatly simplifies cleaning up resources and avoiding resource leaks (like open sockets files, etc.). In fact, one of the overlooked difficulties when dealing with low-level multi-threaded code is the lifecycle management of various concurrent resources.

Stopping an actor can be done by calling Context.Stop(actorRef). It is considered a bad practice to stop arbitrary actors this way. The recommended pattern is to call Context.Stop(self) inside an actor to stop itself, usually as a response to some user defined stop message or when the actor is done with its job.

The actor API exposes many lifecycle hooks that the actor implementation can override. The most commonly used are PreStart() and PostStop().

Again, we can try out all this with a simple experiment:

After running it, we get the output

The family of these lifecycle hooks is rich, and we recommend reading the actor lifecycle section of the reference for all details.

Parents and children are not only connected by their lifecycles. Whenever an actor fails (throws an exception or an unhandled exception bubbles out from receive) it is temporarily suspended. The failure information is propagated to the parent, which decides how to handle the exception caused by the child actor. The default supervisor strategy is to stop and restart the child. If you don't change the default strategy all failures result in a restart. We won't change the default strategy in this simple experiment:

After running the snippet, we see the following output on the console:

We see that after failure the actor is stopped and immediately started. We also see a log entry reporting the exception that was handled, in this case, our test exception. In this example we use PreStart() and PostStop() hooks which are the default to be called after and before restarts, so we cannot distinguish from inside the actor if it was started for the first time or restarted. This is usually the right thing to do, the purpose of the restart is to set the actor in a known-good state, which usually means a clean starting stage. What actually happens though is that the PreRestart() and PostRestart() methods are called which, if not overridden, by default delegate to PostStop() and PreStart() respectively. You can experiment with overriding these additional methods and see how the output changes.

For the impatient, we also recommend looking into the supervision reference page for more in-depth details.

Actors are organized into a strict tree, where the lifecycle of every child is tied to the parent and where parents are responsible for deciding the fate of failed children. At first, it might not be evident how to map our problem to such a tree, but in practice, this is easier than it looks. All we need to do is to rewrite our architecture diagram that contained nested boxes into a tree: 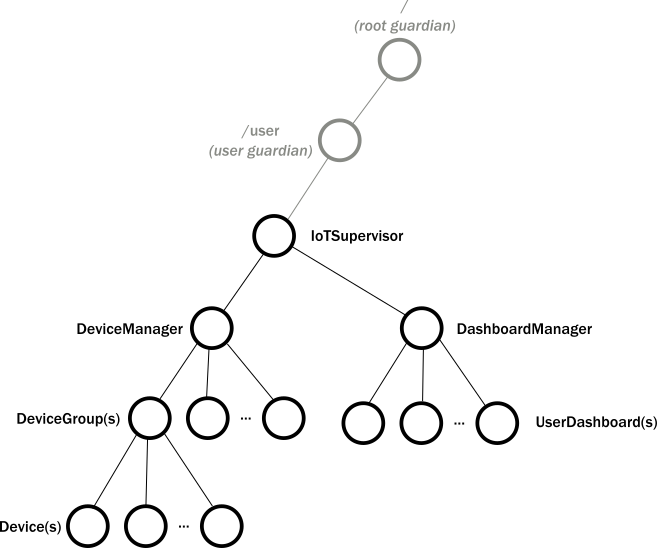 The first actor happens to be rather simple now, as we have not implemented any of the components yet. What is new is that we have dropped using Console.WriteLine() and instead use ILoggingAdapter which allows us to use the logging facility built into Akka.NET directly. Furthermore, we are using a recommended creational pattern for actors; define a static Props() method in the the actor:

All we need now is to tie this up with a class with the main entry point:

This application does very little for now, but we have the first actor in place and we are ready to extend it further.

In the following chapters we will grow the application step-by-step: